A slice of paradise, …

Glaciers define their landscapes and give them a distinctive, unmistakeable character such as we find here in the Bernina region. Glacier landscapes are rich in different patterns and shapes, so there is always something new to observe and discover. 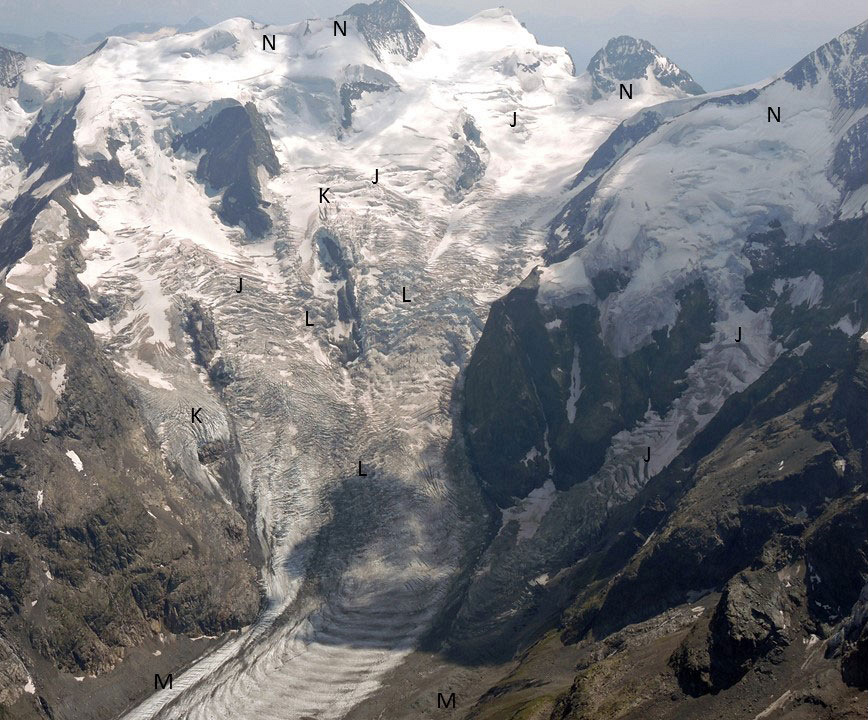 This begins at the glacier snout, where the water leaves the glacier. A glacial stream is typically milky in colour, due to the fine-grained "rock flour" that occurs in and under the glacier. That's why the meltwater from a glacier is sometimes called glacial milk.

The glacier forefield extends from the current glacier snout down as far as the position occupied by the glacier when it was at its maximum length in about 1860. This is a "young", barren landscape consisting of loose scree and boulders. Nevertheless, soon after the ice melts away, plants quickly begin to colonise the newly exposed ground. Whereas only a few, highly specialised pioneer species are found near the glacier snout, in the lower part of the Morteratsch forefield the larch and pine trees that are typical of the region are already present.

Medial moraines begin where two glaciers meet or where the ice flows round a boulder. They are made up of stones which fell away from the cliff faces and landed on the glacier. Medial moraines look like long, narrow ribbons that follow the course of the glacier. The curving medial moraines on the Pers glacier can be clearly seen from the Diavolezza.

The last time that the glaciers in the Alps really advanced significantly was during the so-called "Little Ice Age". They reached their greatest extent between 1850 and 1860. The mighty lateral moraines still indicate today how far out the edge of the glacier reached along the sides of the valley. They show us just how massive the glacier was at that time.

Hanging glaciers are like balconies of ice adhering to the steep walls of the valley and they are easily recognised by their vertical faces where the ice breaks off. Thanks to their altitude, they barely melt at all and grow all the time, but their ever-increasing weight is literally their downfall: blocks of ice, large and small, are constantly breaking away. Typical hanging glaciers can be found on Piz Palü, Piz Bernina and Piz Morteratsch.

Glacial ice is plastic and flows gradually down the valley due to gravity. Where a rocky ledge occurs beneath the glacier, the surface breaks open into transverse crevasses, because the ice moves slightly faster on the steeper section than it does above the ledge. As the name suggests, these cracks are at right-angles to the direction of flow of the glacier. Beneath the ledge, the rate of movement slows down again, and the crevasses close up again.

These are formed in the same way as transverse crevasses but parallel with the direction of flow. Typically they form where the glacier broadens out again after a narrow section.

Seracs are columns of ice that form where transverse and longitudinal crevasses intersect. The result is often a chaotic-looking jumble of towers. The columns of ice are very unstable and usually collapse after a short time.

Marginal crevasses open up where the glacier is slowed down at the edges by intense friction but the middle part of the glacier flows faster.