Glacial landscapes are dynamic landscapes. Because the ice is moving due to the effect of gravity, and because it melts at temperatures above zero degrees, changes are taking place all the time. The permafrost is in the ground, so it is less easily visible than the glaciers, but it, too, defines the landscape and is also affected by warmer temperatures. Permafrost occurs when the temperature below ground is below zero degrees Celsius throughout the whole year. Typical permafrost sites are usually above the tree line in piles of rubble made up of coarse boulders and with no vegetation, or else on shady, north-facing rock faces. Patches of snow that remain through most or even all of the summer are typical indicators of permafrost. Sometimes unusual-looking bulges in the rubble, reminiscent of a lava flow (see rock glaciers), also indicate an area of permafrost.

The permafrost does not normally extend right up to the surface. Depending on its location, the top few metres may thaw in summer. This is called the active layer and it does not count as actual permafrost, because it does not remain at a temperature of below zero degrees Celsius all year. The bulk of the actual permafrost may extend up to 60 metres below ground, until the Earth's own heat causes the temperature to rise above zero again.

If meltwater or rain penetrates into a pile of rubble where there is permafrost, it freezes between the stones. In this way, a considerable quantity of ice can accumulate. Because ice takes up more space than water, it often creates bulging, rounded shapes. And because ice is viscoplastic and flows slowly downhill, rock glaciers are formed. These are distinctive masses of rubble that look a little like lava flows.

If the ice in a rock glacier melts, then sometimes it is no longer able to advance by flowing along. The rock glacier is then described as inactive. In the steep, more finely grained front part, the first plants become established, forming a green strip.

Unlike true glaciers, rock glaciers do not retreat when they melt. When the ice melts, they collapse inwards, but their shape remains, forming what is called a relic rock glacier.

Construction work (avalanche protection, mountain cableways, mountain restaurants, SAC huts) is particularly difficult on permafrost ground. Because the ice is slowly flowing along, the ground is constantly shifting. If the main body of ice begins to melt, the loss of volume is often huge, which causes significant subsidence. 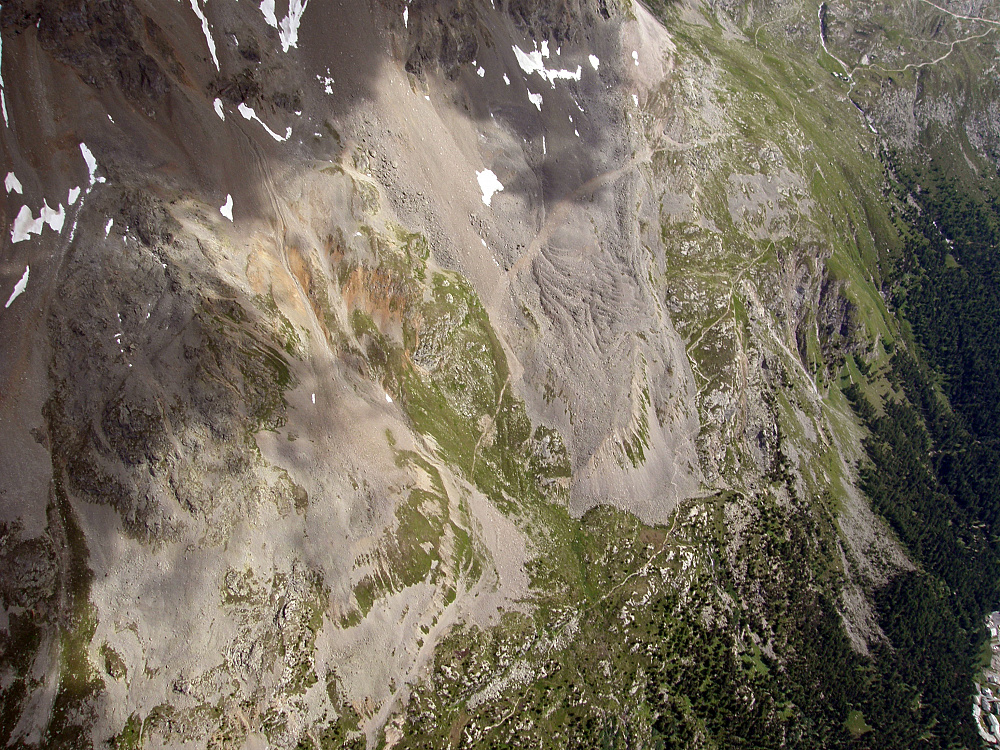 Unlike permafrost, glaciers are reacting far faster and more dramatically to the warming climate (see also the accumulation zone, ablation zone and equilibrium line at Information Point 1) . In Switzerland, around 120 glaciers are measured every year. All the resulting measurements can be found at www.glamos.ch. . For example, they show that the Morteratsch glacier lost around 2900 m in length between 1878 and 2019. It lost about 16% of its surface area during that time. During the same period, the average annual temperature in Switzerland rose by about 1.8 °C.